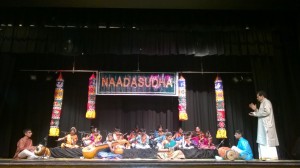 This weekend, I attended ‘Naadasudha’ the carnatic music concert staged for the students of Sri A.G.A. Gnanasundaram.  Gnanasundaram as a renowned violin artist and a resident teacher in London founded Naadasudha with the aim of taking carnatic music to the next generation. His vision is to impart the knowledge and values of carnatic music as a culture to the next generation.  He is the disciple of legendary maestro Lalgudi Jayaraman and teaches the Lalgudi Bani of music to his disciples.  I found the definition of Lalgudi Bani as to make the violin sing and being the focal point.

Naadasudha provides a great opportunity for his students to perform complex compositions on the stage. The event was held in Winston Churchill Hall in the suburbs of London attended by I guess about 300 people and his students should number about 80-100 of them. Sitting in the audience and listening to the four hour program was a great experience. Most of the concert attendees were the parents of children who are learning with A.G.A Gnanasundaram. Lots of effort goes in teaching and preparing his students and I have seen parents including myself take the effort to bring children to the classes for their practice.

The entire program was dedicated to the legendary violinist Lalgudi Jayaraman who had passed away last year. Some fascinating facts about Lalgudi Jayaraman, his disciple’s experiences and legendary stories were presented during the event, which was interesting to hear. Lalgudi appeared in the music scene at a very young age and established his reputation and dedicated himself in this field for over 70 years.  His style of Violin playing has been to replicate the vocal signing as close as possible. It goes without saying that the students of Gnanasundaram should be fortunate to have him as their teacher and an opportunity to learn the Lalgudi style of playing.

The students played a wide range of complex compositions ranging from Arunagiri, Thyagaraja, Papanasam Sivan and Muthuswami Dikshitar among others. The program started with his youngest of students playing Srigananatha and ended with the older students playing Thillanas and Varnams, which were great in terms of content and melody. It was outstanding performance including the vocal, violin and great percussion support and each contributed vastly to the program.