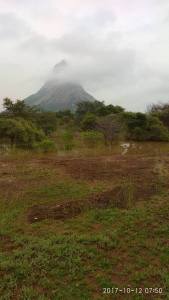 A two-hour journey involving a bus ride from the temple town of Palani and an auto ride from the nearest town takes you to this small village tucked in wilderness.

The mountain arises like a pyramid near the snout of the village resembling a linga.

The steep mountaintop is a magical destination and houses Shiva as lord Mallikarjuna in an ancient cave. The conical shaped hill stands majestically at about 4000 feet tall.

I had decided this as a perfect place to spend the night in a secluded cave.

The legend goes that Arjuna set off to this mountain journeying across a wide terrain crossing mountains, rivers and forests. Having reached this hill, Arjuna enters a cave and delves deeply into meditation on Shiva to attain mystical powers. The cave where Arjuna meditated stands as testimony during the journey to the hill top. Shiva here is known as Mallikarjuna.

The trek is challenging, and the 70 degrees inclination makes the climb steep. The tip is to shorten the steps when you are walking uphill to make it easier to lift the body up the incline with each step. The climb is progressively difficult. I would not have made it without the metal and chain support along the way. 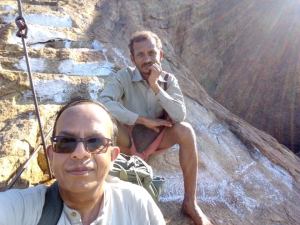 I had prearranged with the poojari, a tall lean person with lots of enthusiasm to accompany me to the hilltop. Two solo travellers joined us during the trek.

The trail took about three hours ending at the natural cave. The cave enshrines the self-manifested Shiva as Malikarjuna. It is cool and the scorching outside heat does not penetrate inside.

There is a natural spring adjacent to the cave from where water is fetched for oblations to Shiva. 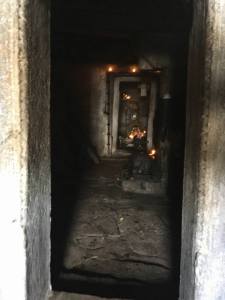 One can feel the elevating energy as you enter the cave. The space has been energised by mystics over ages. It is a unique opportunity to sit in this cave and meditate.

Hot pongal was being prepared in another corner of the cave. The poojari was alternating between the rituals and preparing the pongal consisting of roasted rice, cardamom, grated coconut and pieces of jaggery.

The ritual bathing of the linga was complete and the aroma of incense and camphor filled the space. The pongal was duly offered to the deity and later distributed to us. I helped myself with a liberal serving as I stuck my fingers into the sweet pongal.

I left the cave, hiked down a narrow path through shrubs and continued around the rider to a smaller cave set in a rock face. I could sight a faintly visible linga in the darkest corner of the cave. 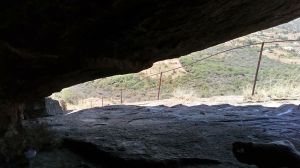 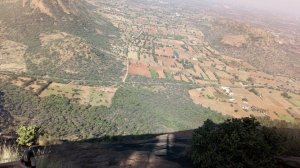 I set my backpack down in the middle and sat down. This was indeed a perfect and blissful place to spend the night in seclusion.