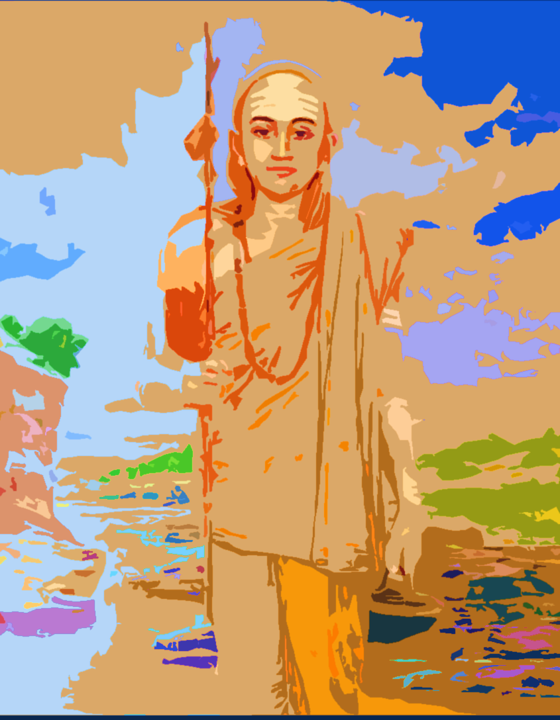 It was past noon as we sat with our hungry tummies in front of the banana leaves waiting to be served.

The dining area was filled with about 50 people. Men and women sat opposite to each other on the ground in two rows. The place was airy and neatly maintained.

The meal was simple and satisfying. The menu consisted of hot rice, sambhar served in a jug, raw banana curry and a sweet. We were about to finish when someone shouted from inside that curd rice was arriving. Tasty curd rice arrived and ample amount served. Seated beside me was Sid, quietly enjoying his meal.

The women in the opposite row offered to collect the banana leaves once we finish and clean the area. We thanked them as we walked out of the dining area.

The dining area leads to the main hall. The hall is serene and peaceful. Some men were preparing for an afternoon nap stretching themselves on the floor.

The hall has a large mandapam housing the presiding deity Chandramouliswara. We had earlier attended the rituals performed by the seer in the packed hall before the meal.

It was time to leave as we headed towards the exit. I had asked my driver to meet me at the main entrance.

Someone called from behind as I was stepping out. A middle-aged man was waving at us to come inside. He claimed that the seer wanted to meet. I and Sid contemplated for a moment and decided to get in. We were escorted inside and asked to sit outside a room adjacent to the main hall.

It was a patient wait that lasted for thirty minutes. A young man in late twenties walked out of the room and offered a set of clothes to Sid in a tambalam. A pair of cotton veshti and angavastiram. He instructed Sid to wear the traditional attire and wait.

We were called inside the seer’s room after ten minutes.

The seer was seated near the southern wall as we entered.

There were a handful of people around him. One of them instructed us to sit as we comfortably sat in the front. The place was serene. The seer occasionally conversed with the men around him.

We sat for another thirty minutes waiting to see what happened next.

The seer now turned his gaze towards Sid and asked as to what he was doing. It was brief conversation between him and Sid that lasted for a minute.

He asked us to leave and we headed back.

(The seer is Sri Vijayendra Saraswati, Shankar Mutt in Kanchi. An unplanned trip to Kanchi along with my son Siddarth  in 2016.)